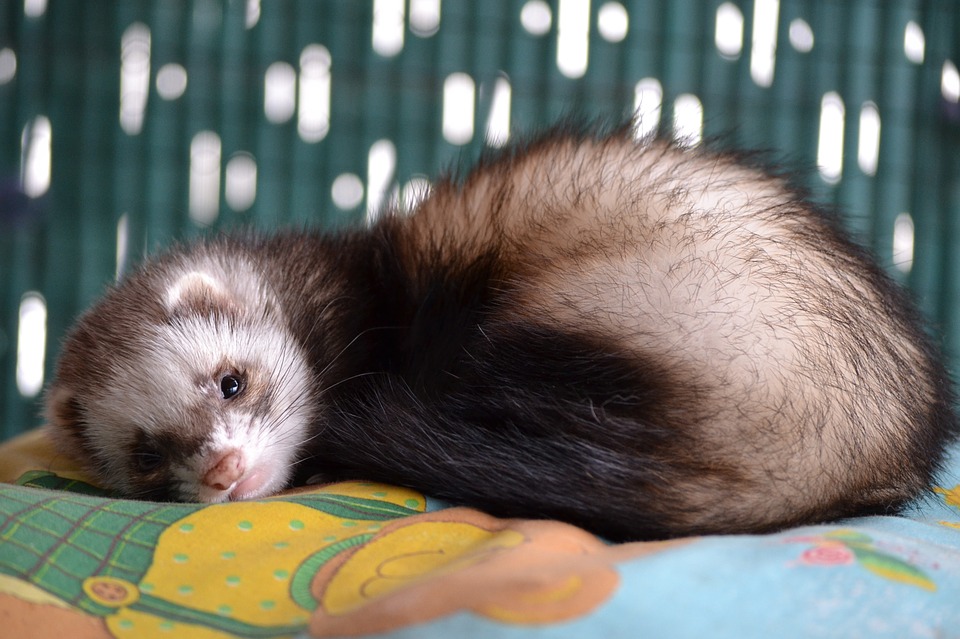 Ferrets are fun, vibrant creatures and make great pets, but how much do you really know about them. These zippy little critters are pretty interesting and very friendly.

You will enjoy ferret much more when you know more about it.

If you allow your pet to sleep as much as he wants, you’ll see about 18 hours of downtime each day. While dawn and dusk are a ferret’s favorite time to be up and about, pets usually conform to their owner’s schedule instead.

The animals usually sleep for 2-6 hours and appear dead when asleep at times. They can actually enter into a temporary coma state.

2. They have funny names

They can’t see very well, but they have developed other senses to help compensate for this lack. In fact, you will find that ferrets have an amazing sense of smell and can find food in a maze very quickly. They also have excellent hearing, which helps them detect danger.

4. All ferrets start out white

No matter what color a ferret is, later on, it was born white. Ferrets don’t get their coloring until a little later in life. They can be black, gray, sable, white, brown, or may have mixed colors. Some common patterns include white feet or dark legs and tail or even a white head.

5. They are not rodents

While ferrets might seem like a close relative to the mouse or rat, they are actually in the Mustelidae family. The family includes mink, otters, wolverines, and badgers.

The animals are completely carnivorous. They are unable to process plant matter since their bodies do not produce the appropriate enzymes. Any attempts to make your pet go vegetarian will fail. In the wild, ferrets eat other small animals.

You will probably have better success with specially formulated ferret food or kitten food in a home setting. Raw meat may be dangerous due to parasites and bacteria, but you can give your ferret large soup bones to gnaw on.

7. Ferrets maybe one of the oldest known pets

While dogs probably hold the place of the earliest pet, ferrets have been domesticated for centuries. In fact, there are paintings in Egyptian tombs depicting creatures that look very much like ferrets on leashes. This would indicate that cats were not the only domesticated animal in ancient Egypt.

Ferrets were once used for hunting well over 2,500 years ago. Once domesticated, a wild ferret can never go back to the wild.

8. Pet ferrets can be so sneaky they die from it

Since ferrets love to tunnel and fit through a one-inch hole, they get into tricky places. You have to be vigilant and know where your ferret is. They can be very quiet, so you might not even realize your pet is asleep under a pile of clothes when you scoop the pile up to dump into the washing machine.

They may also hide under a carpet or in pipes or a folding couch. Recliners are another dangerous spot. Since ferrets can sleep so soundly, they may not even wake up until it is too late.

The origin of the word ferret comes from furonem, the Latin word for thief. Any ferret owner will tell you that this is a very accurate name for the creatures.

They love to steal just about anything and hide it in their stashes. Pet owners will frequently find their belongings tucked away in the ferret’s hidey holes.

10. Being in heat can be deadly

The female ferret can be in heat for up to 160 days if not bred. Apart from moodiness, the main problem is that the bone marrow stops producing blood cells. This can cause life-threatening anemia and a deficient number of white blood cells. To prevent the problem, it is usually recommended that female ferrets be spayed around 6 months of age.

You can also have your pet injected with special hormones to shorten the amount of time she is in heat drastically. However, this is a temporary solution and should be used before spaying unless breeding will take place the next cycle.

While not exactly a typical pet, ferrets are certainly fun creatures that you can enjoy. Knowing more about ferret makes them even more fascinating. From interesting eating habits to a long history as domesticated animals, ferrets are some of the more exciting creatures you can invite into your home.

10 Things to Know Before Buying a Ferret 10 Important Tips for Caring for Ferrets 9 Amazing Benefits of Owning a Ferret